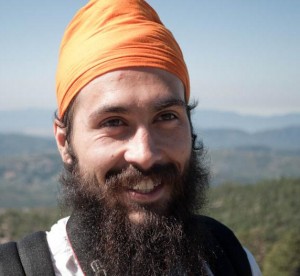 For many years Guru Nanak lived in Sultanpur Lodhi in Punjab, India; the land of five rivers. Every morning in the amrit vela after bathing in the Kali Bein (Black River) he meditated under the same Jujube tree, which he himself planted. But one morning, he did not return. Guru Nanak disappeared into the water.

Many thought he drowned. Many feared he was gone, but after 3 days he emerged.

Guru Nanak wasn’t a preacher; he was a reacher, and he reached beyond The Beyond to bring back the sounds that contain all the knowledge that ever was, is, or will be on the planet Earth. He gave the thought of infinity to infinity to bring us to totality. Because it’s not “I am”, it’s “I am, I am” and I salute thee, beyond The Beyond; Aades tisai aades. Even the limitlessness is limitless.

Every human being has the opportunity to reach self-exalted experience. We have to reach.

No, say no, when you have to say no, that is Nanak.

It was the year 1499. Guru Nanak was 30 years old. Over 500 years later we are still absorbing his attainment.

Footage of the river was shot at Malibu Creek State Park with a Canon T2i, while the underwater footage was shot using a GoPro Hero. All skies were replaced in post-production (it was all shot during the day time in bright sunlight) and the energy beam was added using the visual effects software Nuke. Editing was done in Final Cut Pro 7.