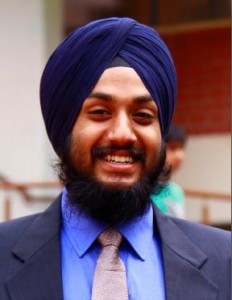 Each Sikh, when he starts the miraculous path of Sikhi, is jolted by some exclusive turns of events that awakes him out of his slumber. Most of us would recall the time when we came to know about our magnanimous ancestors and their contributions to society building followed by bloody rampages done on them. Thus the feeling of being subjected to injustice sets in. The massacre, the holocaust, the pogrom of 1984, Delhi only adds to the yearning of a learning Sikh- to bring his people to justice and himself be a part of the revolution. But it isn’t meant for brash, insolent young Sikhs to do it- but the matured, full ripe, tender Sikhs who shall do something significant for the panth.

Being a little kid, the director wrote and sang this composition fancying himself as a kavishari. He was young, brash and overwhelmed with raw, enthusiastic vengeance. Over the years the audio was lost owing to the ‘kavishars’ ignorance and shift(s) in paradigm(s). Look at the serendipitous stroke of luck that the audio file was kept safe and sound with an admirer of the poetry sung therein. In no time it found a video to go by it and voila! Here is it! Videoing and editing skills were never a part of my repertoire, well, nor was poetry- this video comes as an attempt anyhow to probably blaze a trail which was never meant to illuminate in the first place. But hey, what could be more illuminating for you than Gurparsad (lord’s own will)? The “director” says- Get the message of the video, and stay in touch (with gurparsad)!